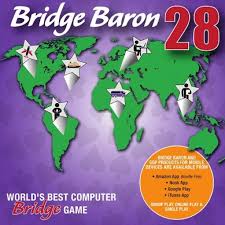 Bridge Baron is a five time winner of the world computer bridge championship. Available for Windows and Macintosh.

$89.95 (CDN) Purchase and have shipped to your address

We send you a  serial number & download instructions – you save $4.95 + shipping

Upgrade your old Baron versions 25 or higher to the newest  for only $50.00! To purchase your upgrade you must send in your old disk as proof of previous purchase. Contact Us for more information.

TO USE ONLINE PLAY: Must have Windows XP (SP3) or later.

Improved the bidding and play.

Features that are still in the newest version:

Added the XYZ convention.
For your opening 1NT bid, you now have not only the choice of a three-point range, such as 12-14, 15-17, or 16-18, but also the option of a four-point range, such as 11-14 or 15-18.
Added new Bridge Tournaments for FREE, such as the 2013 Cavendish (with cross-IMPs scoring) and the 2014 NSWBA ANC Butler Open Selection (with Butler IMPs scoring).
24 new challenging problem deals for a total of 434 Challenges. Kit Woolsey, multiple world champion and author of several bridge books, designed the new deals.
Improved the bidding, declarer play, and defense.
Menu - Major changes to our new settings feature include - settings can be updated at any time, no limitations; settings is a single window with 6 Tabs that lets you manage all game settings.
Info Tab - The Info tabs located on the right, replaces most of the actions from the Main Menu actions in BB23.
Auction Interpretation Feature - Auction Interpretation will give you the tools you need to make the right bidding decisions.
Par Contract View Improved bidding, declarer play & defense
New tournaments, including 2012 Cavendish (cross-IMPs) and 2013 Butler Open Selection (Butler IMPs)
24 new challenging problem deals designed by Kit Woolsey for a total of 410 challenges
An all-new, easy-to-use Windows graphical user interface

MORE FEATURES:
All 53 octillion (that's 53 billion billion billion) bridge deals as possible random deals in Bridge Baron.
Duplicate / Rubber /
Part score hands / Game hands / Slam hands / No trump hands
Bidding flowcharts
Bidding Interpretation that shows
Entered deals from newspaper or other sources
Play generated deals created with the Deal Generator
Comprehensive Statistics of Your Results
Double-dummy and par-contract solvers
Challenging problem deals
Convention practice module
Ability to specify which hands will be played by a human and which hands will be played by the computer.
Play from PBN and PPL library
Save deals to PPL library

BRIDGE BARON ONLINE FEATURES:
Play Duplicate/Rubber bridge games
Play on Public or Private (invitation) tables
Never wait for seats to fill up, bots will play until humans show up
Build your only Buddy list
Undo and claim with approval from other players
Choose convention card for each partnership
Bots can be beginner, intermediate or advanced.